Proximity to power is valuable currency in Washington, D.C. So it won’t surprise folks inside the Beltway that the city’s prominent players occasionally exaggerate their standing. But we’re from New York City, and we couldn’t help but notice that this photo, which appears on the website of the Hyatt Regency Washington on Capitol Hill, gives the false impression that the hotel practically stands in the shadows of the U.S. Capitol. It doesn’t. Take a look at this photo that we snapped last week during a hotel-reviewing trip to the city and that, we think, more accurately reflects the distance from the hotel to the Capitol — which is, in fact, about a third of a mile. That’s close, just not reach-out-and-touch-it close.

Update: Since we published this Fakeout, the hotel replaced its marketing photo with a more accurate one. Kudos, Hyatt Regency!

Source: D.C. Photo Fakeout: The U.S. Capitol is close, but not this close | Oyster.com — Hotel Reviews and Photos 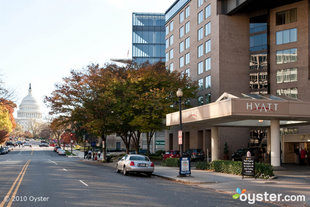 Orbitz.com launched a new ad campaign on Friday that claims “When you Orbitz, you know.” According to the ads, you should research your vacation with Orbitz so that you can know what to expect when you arrive at your hotel. The television ads began on Friday, and print ads will pop up starting this month as well. But consumers should be wary of this new campaign, as the exact opposite of its claim is true — especially when it comes to Orbitz’s photos. The photos used on Orbitz often look nothing like the reality that awaits our undercover hotel reviewers when they arrive at hotels.

Source: When you Orbitz, you actually have no idea what you’re going to get | Oyster.com — Hotel Reviews and Photos